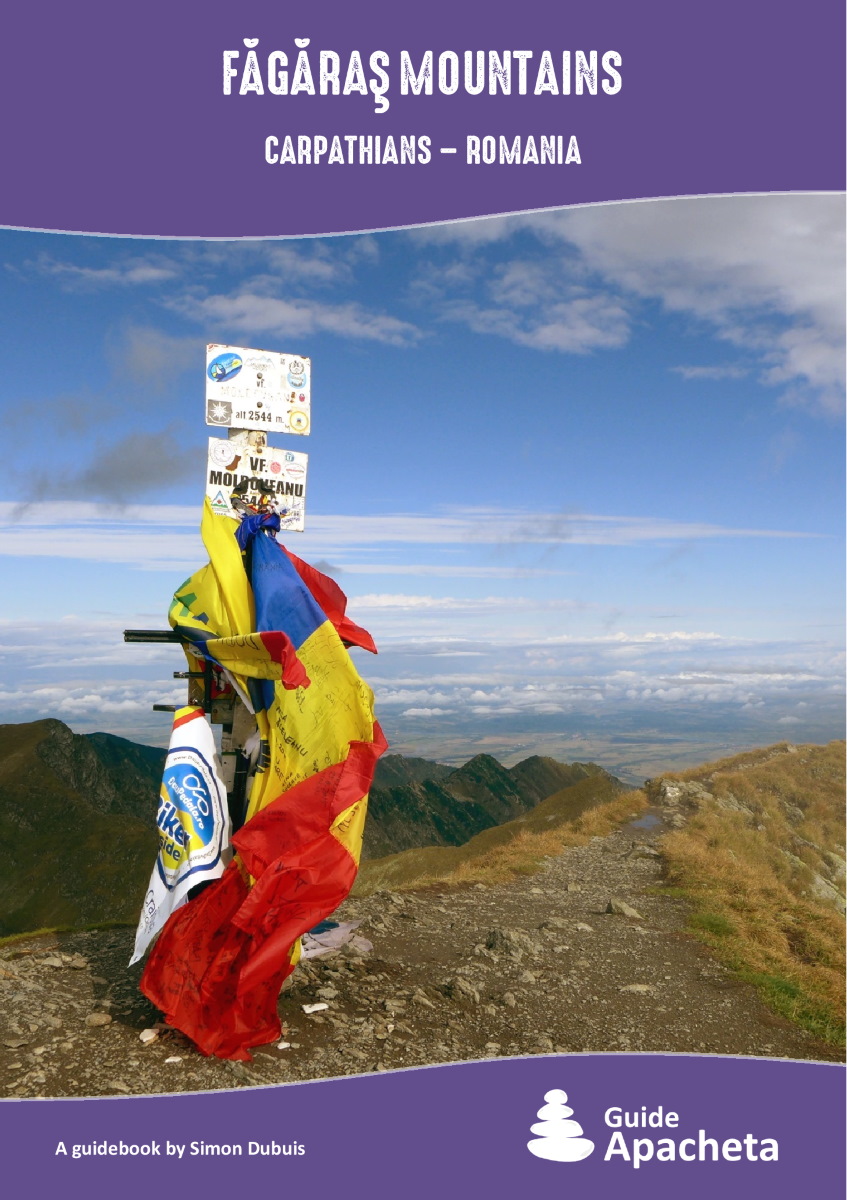 Take the challenge of crossing the Munții Făgăraș

The Făgăraş Mountains are mountains located in the Southern Carpathians of Romania that dominate the Transylvanian region, between the cities of Braşov and Sibiu. This mountain range, culminating at the top of the Vârful Moldoveanu at 2544 meters, is the most imposing and highest in the country and the second highest in the whole Carpathians. Numerous marked trails criss-cross these mountains, allowing you to discover this long, jagged ridge.

You will find in this 38 pages guide, all the necessary information to organize your hike, a complete description of the routes, as well as a GPS track associated with the topo. A complete GPS file of 145 km of trails which includes 9 tracks and 125 waypoints.

The Munții Făgăraș in Romania

The origin of the name Făgăraş is not certain. The oldest document mentioning the castle of Făgăraș, located in the small town of Făgăraș, dates from 1291 and uses the word fogra. It could come from the Hungarian fogor (derived from fogoly potârniche) which means a place where partridges abound, or from the Peçenekler (a nomadic people of Turkish origin) fagar šu which means ash water.

This term can refer to several geographical locations. Both Sweden and Finland have an administrative region called Lapland. Culturally, Lapland is a cross-border region in Northern Europe, straddling Norway, Sweden, Finland and Russia. It encompasses the vast territory historically inhabited by the Sámi people. Long known as Lapps, a pejorative Swedish word meaning rag wearers (old, worn and dirty cloth worn as clothing by the needy), the region eventually took on the name Lapland.

The Făgăraş Mountains, or Munții Făgăraş in Romanian, are located in the Carpathian in Romania, between the cities of Braşov and Sibiu. It is part of the Southern Carpathians, often referred to as the Transylvanian Alps. The Făgăraş, resembling an imposing backbone 70 kilometres long, stretches from east to west over nearly 2400 square kilometres. It has 8 peaks exceeding 2500 metres in altitude, the highest of which is the Vârful Moldoveanu, the highest point in the country at 2544 metres. The Făgăraş Mountains are the second most imposing mountain rangein the Carpathians after the Tatra Mountains (Tatry in Slovak or Polish). It straddles Slovakia and Poland and reaches an altitude of 2655 metres. A true natural rampart, the mountains Munţii Făgăraş is like a border within the country itself, separating the Transylvanian plateau from the plains of southern Wallachia. It can only be crossed by the famous Transfăgărăşan road. It passes through the mountain through a tunnel at the level of Lake Bâlea, the most impressive glacial lake in the Făgăraş Mountains.

The vegetation of the Făgăraş Mountains is rich, diverse and varies according to altitude. It is divided into two sectors. Up to 1800 metres above sea level there is a forest zone which consists mainly of beech, birch, maple and coniferous trees. Above this is the alpine zone between 1600 and 2500 metres above sea level, which contains meadows, juniper trees and groves. The fauna is similar to that of the Alps, with chamois and marmots at higher altitudes, roe deer and wild boar in the forest. But one animal that has disappeared from our region still reigns in the Carpathian Mountains, the bear, which is at home here.

Despite their beauty, the Făgăraş Mountains have few protected areas. They remain a natural mountain range, exploited by foresters, shepherds and tourists. Today, with its cultural and folklore heritage, castles and fortresses, Southern Transylvania attracts tourists. During the summer season, Romanians arrive from the capital to spend their summer holidays in this pleasant region. The Făgăraş Mountains have become a popular hiking destination in Romania. They attract both occasional walkers, concentrated in the Lake Bâlea area for convenience of access, as well as hikers exploring the star-shaped path from a mountain hut, or adventurers embarking on the great crossing of the mountain range.

The crossing of the Făgăraş Mountains by the ridge remains an isolated hike, physical by its commitment and linked to the weather conditions at altitude. It remains a challenge for hikers, but the mountain range offers the possibility of adapting the itinerary and the stages according to one’s level.

The Făgăraş Mountains has several delicate passages equipped with chains, as well as passages on the edge of the void. They are grouped mainly in the west of the mountain and the most difficult ones have alternative routes to go around them, especially in the Vârful Negoiu sector. In case of bad weather, it is strongly recommended to take them. As far as orientation is concerned, the routes are well signposted and the paths obvious. Only the long passage through the logging sector can be a cause for concern. Here too, a second itinerary is available from Cabană Plaiul Foii.

Some stages can be long and require physical fitness, especially for a crossing in autonomy. It is possible to cut out the stages, as there is no lack of mountain shelters, but this requires you to take a little more food with you. It is also possible to reach the different mountains huts in order to take advantage of the comfort they provide. They are generally far from the main route and therefore lengthen the duration of the trek a little.

During the high season, the mountain range is frequented, especially the central part between the Bâlea complex and the Vârful Moldoveanu. Even if you are far from any roads, you will not be completely alone. Moreover, civilisation is never far away; you only have to go through a valley on the north side of the mountain range to find it. The crossing on the ridge requires autonomy, but it is possible to easily reach the different huts located in the valleys.

The cumulative daily height differences are significant and some climbs are sometimes steep, but there are no long, exhausting climbs. The route climbs up and down throughout the day, thus balancing the difficulties. As far as altitude is concerned, the Făgăraş Mountains are the second most imposing mountain in the Carpathians and culminate at an altitude of 2544 metres at the top of the Vârful Moldoveanu.

The Făgăraş Mountains has hundreds of kilometres of hiking trails. They are not limited to those described in this guide. You will find in this book the main route that crosses the mountain range by the ridges from East to West. It is an integral part of the Via-Carpatia, the great international hiking trail that crosses the entire Carpathian Mountains. The most interesting areas for hiking are of course the ridge, which offers an exceptional panorama of the entire mountain range, as well as the Transylvanian plateau.

The mountain range offers itineraries for all levels, ranging from a daily hike to ten or twelve days of walking. However, unless you have your own vehicle, it is best to opt for a minimum of two or three days. The busiest sector is between the Bâlea complex, which provides quick access to the ridge, and the Vârful Moldoveanu, the main attraction of the Făgăraş Mountains.

2 to 7 days hike: Vârful Moldoveanu. One of the most interesting short hikes is to the Cabană Podragu from Victoria. From there you can easily reach the Vârful Moldoveanu and then descend through one of the valleys leading to Victoria or Sâmbăta, all in 2 or 3 days. For longer hikes, start the crossing at Zărnești and leave the mountain range via a valley on the north side, passing the Sâmbetei or Podragu hut (cabană).

7 to 10 days hike: Crossing of Făgăraş Mountains. The complete crossing of the ridge of the Făgăraş Mountains requires 7 to 10 days of walking depending on your level and the route chosen. It is possible to make the crossing by staying on the ridge at all times, the shortest route, or by reaching the various mountains huts off to have a hot meal and spend the night there. At any time, you can leave the mountain range via one of the valleys on the north side, either via the Bâlea complex or via the huts (cabană) Negoiu, Bărcaciu or Suru.

More than 10 days hike: Crossing the Piatra Craiului and Făgăraş. It is possible to make a hike lasting more than 10 days by crossing the impressive small Piatra Craiului mountain range (not described in this guide) before starting the one on Făgăraş. Starting from Zărnești, you just have to go towards the village of Măgura and take one of the paths in the park that lead to the top of the ridge and then down to the hut (cabană) Garofița Pietrei Craiului or the shelter (refugiul) Şpirla, starting points for the crossing of the Mountains Făgăraş.

Fields marked with an asterisk* are obligatory.
Your data will remain confidential and will never be sold, given or rented to a third party. Consult the page Legal notice.