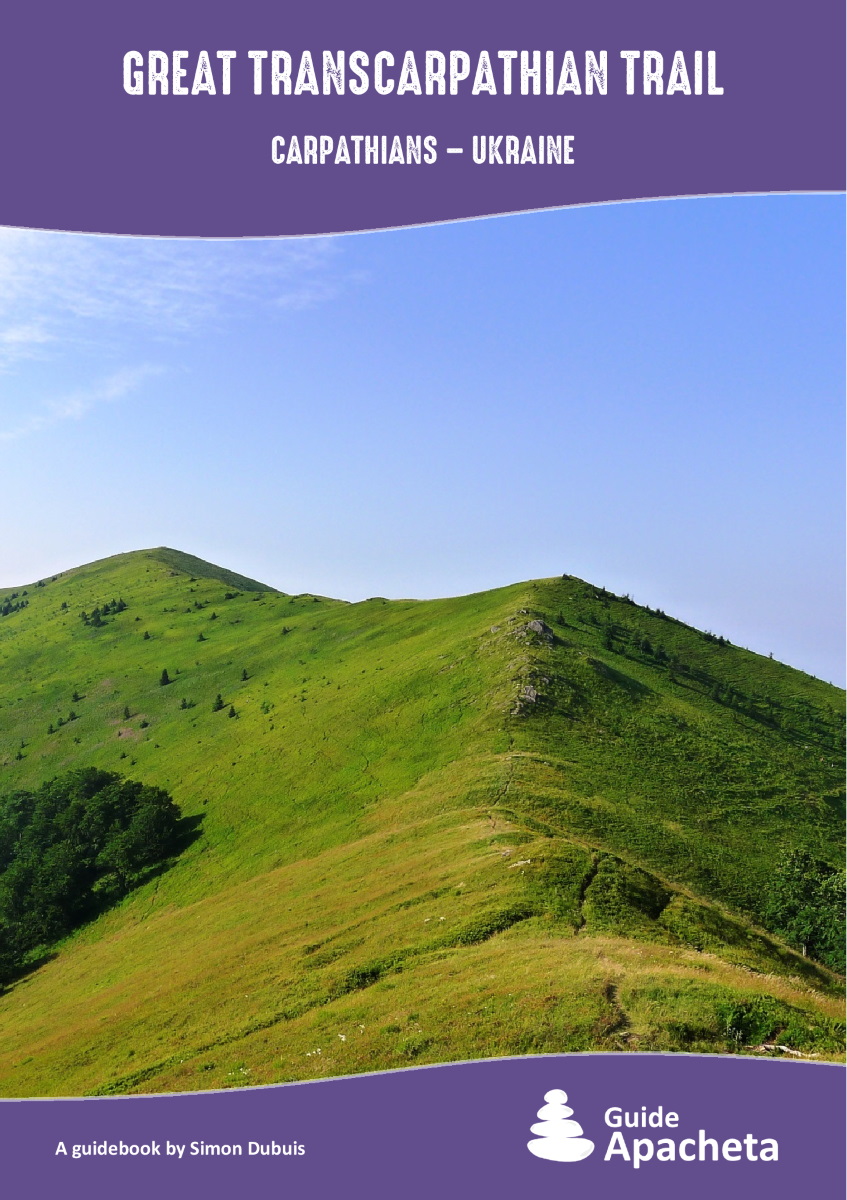 Discover the charm of the Ukrainian Carpathians

The Transcarpathian Oblast is a region in the far west of Ukraine, on the border with Europe. The Carpathian Mountains run through it from one side to the other, culminating in Mount Hoverla at 2061 metres, the highest peak in the country. This green ridge, criss-crossing the Transcarpathian, is crossed by the Закарпатський Туристичний Шлях (Transcarpathian Tourist Way), the great hiking trail that crosses the Ukrainian Carpathians.

You will find in this 47 pages guide, all the necessary information to organize your hike, a complete description of the routes, as well as a GPS track associated with the topo. A complete GPS file of 300 km of trails which includes 12 tracks and 81 waypoints.

The Transcarpathian Oblast in Ukraine

The term “Ukrainian Carpathians” has no geographical notion, but rather a political and ideological one. It began to be used in 1939 by Soviet politicians, journalists and academics. In reality, the Ukrainian Carpathians are only a part of the Eastern Carpathians, which stretch across Poland, Ukraine and Romania. The Transcarpathian Oblast/Закарпатська область, whose name means “beyond the Carpathians”, is a region in the far west of Ukraine, bordering Poland, Slovakia, Hungary and Romania. The Carpathian arc stretches across approximately 280 kilometres and is cut by deep transverse valleys. The chain contains six peaks above 2000 metres, the highest of which, the highest point in the country, is Mount Hoverla/Говерла with its 2061 metres above sea level. More than two thirds of the oblast has a mountainous relief which is the cradle of the Hutsuls culture, a mountainous ethnic group. Their traditions and customs are still today part of the jewels of the Ukrainian Carpathians.

The mountains of Ukraine, with their gentle shapes, rounded ridges and conical peaks, have many protected areas that ensure the preservation of fauna and flora, such as the Carpathian Biosphere Reserve created in 1968 and the Carpathian National Park. The Carpathian National Park was the first national park created in 1980 and is one of the largest with its 505 square kilometres. It is located in the highest part of the Carpathians, stretching around Mount Hoverla/Говерла at altitudes between 500 and 2000 metres. Forests are the region’s greatest wealth, occupying more than 50% of the territory, with a diversity of species that varies according to altitude. The plains are mainly populated by oak trees, the mountain foothills by hornbeams, while oak and beech trees occupy the space between 800 and 1000 metres above sea level. Between 1300 and 1500 metres, they are replaced by firs and spruces. Beyond that, the alpine meadows run up to the ridges. There are more than 2000 different plant species in the region, which corresponds to half of the known species in the Ukraine. There are also almost 400 species of vertebrates, including a large proportion of insectivores, such as bats and rodents. The most common mammal species in the Carpathians are weasels, foxes, wolves, ermine, martens, wild boars, roe deer, red deer… but the mountains are also home to brown bears, lynx, wild cats, boreal owls, black storks, golden eagles, harriers…

During the summer season many Ukrainians spend their summer holidays in this pleasant region. The Carpathian National Park is a popular hiking destination in Ukraine. It attracts local walkers as well as Slovaks, Hungarians, Poles… who come to walk and climb Mount Hoverla/Говерла, or to explore the paths of the region on foot. In some areas, such as around Ust-Chorna/Усть-Чорна, 4×4 tourism is also developing. But on the whole, it remains relatively weak in the Ukrainian Carpathians, mass tourism does not exist in Transcarpathia.

The Great Transcarpathian Trail is the great long-distance hiking trail that criss-crosses the Ukrainian mountains. Although it does not present any technical difficulties, it is not yet 100% marked. Its development is still in progress and some corners of the route remain isolated. The southern half of the route remains the most frequented by locals and the northern half, the wildest part.

The Ukrainian Carpathians have no difficult or technical passages. They are within the reach of all hikers, even beginners. The main difficulty lies in the orientation. If between Luhy and Volovet’s, the routes are well marked and mapped, from Volovet’s and up to Uzhok, the marking is more random, sometimes even non-existent. The northern part of the trek requires some orientation skills.

Some stages can be long, due to a lack of water on some sections, but in general this trek is quite easy. Apart from one or two big stages, it does not require any particular stamina. The itinerary often passes through villages, where you can rest and eat in hostels.

During the high season, the Carpathian National Park is frequented mainly by locals and a few walkers from neighbouring countries, attracted by Mount Hoverla. Once you leave this area, the paths are practically for you. With the villages scattered along the route, it is possible to get food on a regular basis during the trek, thus requiring only 2 to 3 days of food autonomy.

The gradients are not excessive and the highest point is only 2060 metres above sea level at the top of Mount Hoverla. The climbs are sometimes steep, especially in the southern part, but there are no long gruelling climbs. The gradients are generally balanced throughout the day.

Apart from these points of difficulty, Ukraine is a destination that can be complicated to understand. In addition to the language barrier, there is also the writing barrier. Decoding Cyrillic will be a real asset for your trip

The Ukrainian Carpathians have many networks of hiking trails. The signposting of the paths, which has been carried out for several years by the “Carpathian Paths” association, is constantly being extended. In this guide you will find a description of the route of the Great Transcarpathian Trail from Luhy/Луги near the Romanian border to Uzhok/Ужок on the Polish border.

The easiest way to organise this crossing is to go to Rakhiv/Рахів, the gateway to the Carpathian National Park. From there it is possible to go on a hike of a few days to two weeks, according to your wishes, starting from the hamlet of Luhy/Луги.

2 to 3 days hike: Mont Hoverla. Starting from Luhy/Луги, one of the most interesting short hikes is to follow the ridge line of Pip Ivan Chornohirskyi/Піп Іван Чорногірський to Petros/Петрос via Mount Hoverla/Говерла. You just have to go back down to Kvasy/Кваси to take a bus back to Rakhiv/Рахів.

4 to 10 days hike: Crossing of Transcarpathian. As you set off across the Transcarpathia, you have the choice to stop wherever you like. Several towns allow you to leave the itinerary on the way and thus choose the duration of your trek. From Luhy/Луги you can reach Ust-Chorna/Усть-Чорна in 5 days, Kolochava/Колочава in 6 days, Mijgiria/Міжгір’я in 8 days or Volovet’s/Воловець in 10 days. In each of these cities you will find buses to take you to a big city on the western and eastern slopes of the Carpathians.

More than 10 days hike: Great Transcarpathian Trail.For a 12 days trek, follow the complete itinerary of the Great Transcarpathian Trail described in this guide, from Luhy/Луги to Uzhok/Ужок. To extend the duration to just a few days, you can start from the official start at the Pip Ivan Marmaroskyi summit/Піп Іван Мармароський on the Romanian border (South of Rakhiv/Рахів), and finish at Kremynets/Креминец, the summit of the three borders, Ukraine-Slovakia-Poland.