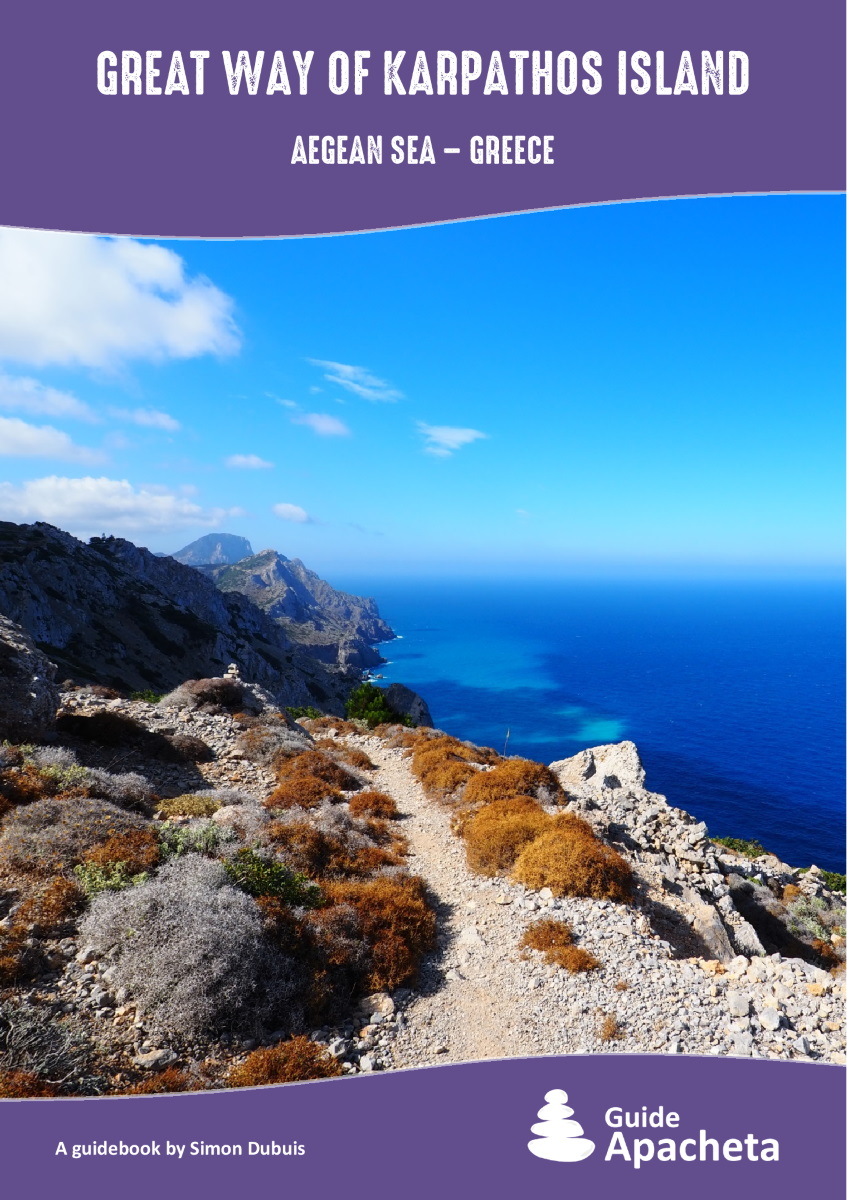 Between sea and mountain, a hike under the Greek sun

Karpatos / Κάρπαθος is one of the largest islands of the Greek Dodecanese archipelago in the Aegean Sea. Remote and isolated, it has retained all its authenticity. Walking through this mountainous island allows you to discover its charming port and mountain villages, its crests and peaks overlooking the sea, as well as its heavenly beaches with turquoise waters.

You will find in this 48 pages guide, all the necessary information to organize your hike, a complete description of the routes, as well as a GPS track associated with the topo. A complete GPS file of 300 km of trails which includes 14 tracks and 98 waypoints.

This guide has been produced with the support of Paths of Greece and the Karpatos Tourism and Development Committee.

The island of Karpathos

The second largest island of the Dodecanese archipelago in the Aegean Sea, the island of Karpathos / Κάρπαθος is situated between the islands of Crete and Rhodes. It stretches for about 50 kilometres and is only 6 to 10 kilometres wide. It is completed to the north by the uninhabited island of Saria / Σαρία, only a hundred metres away. The landscapes of Karpathos / Κάρπαθος are essentially mountainous and the island culminates at 1215 metres above sea level, at the top of Kali Limni / Καλή Λίμνη. The northern part is wilder and more rugged, with a few villages perched on the mountainside, while the southern part is more irrigated, with fertile land, and is more inhabited and developed. Along the coast there are numerous beaches of fine sand or pebbles. The island has 6300 inhabitants, 2000 of whom live in the port city of Pigadia / Πηγάδια.

Due to its geographical location, the island of Karpathos / Κάρπαθος has had many influences. From the year 2000 B.C., the island became part of the kingdom of the Minoan civilization of Crete. With a large population, it is culturally and economically developed. Karpathos / Κάρπαθος took part in the Trojan War, the legendary conflict in Greek mythology which brought the kings of Greece to the Trojans, caused by the kidnapping of Helen, Queen of Sparta. Her name, with the inversion of two letters, appears in Homer’s Iliad as Krapathos. It was later conquered by the Dorians from northern Greece, and then passed under the aegis of Rhodes, the neighbouring island, around the year 400 BC. It then became a member of the first Athenian political and military alliance of 150 Greek cities. Later, Karpathos / Κάρπαθος became part of the Roman Empire in 42 BC, and then, after its fall, of the Byzantines around AD 300. It then passed into the hands of the Venetians, Turks and Italians in 1912, until the end of the Second World War. In March 1948, Karpathos / Κάρπαθος and all the islands of the Dodecanese were liberated and united with Greece. During its long history the island was named: Tetrapolis, Anemoess, Kerpe, or Scarpanto in Italian.

Today, the island has many villages that have remained untouched by time. From mountain villages to fishing villages, they have kept their authenticity and contain an extremely rare charm. If the island lives mainly from tourism, it remains moderate, Karpathos / Κάρπαθος not having the necessary infrastructure to accommodate mass tourism. The chapels, churches and historic monasteries, some of which contain magnificent Byzantine mosaics and Turkish frescoes, are an additional attraction. The various archaeological sites of the ancient cities that made up Tetrapolis are also a must to discover the island. Its exceptionally rich traditions and customs can be traced back to ancient roots that the local population has managed to preserve. The remote and isolated geographical position of the island has allowed this preservation, but also the devotion of the inhabitants to maintain them. The folklore of Karpathos / Κάρπαθος includes mantinades, tales, poems or nursery rhymes sung to the rhythm of the music. It also includes songs, dances, proverbs, riddles, tales, myths, games… Curses and oaths have also been part of the daily life of the inhabitants since antiquity.

If the beaches are one of the main attractions of Karpathos / Κάρπαθος, the activities in contact with nature are numerous: diving, windsurfing, snorkeling, hiking, climbing, ornithology… The nature of this rocky island is full of wonders. Its unspoilt mountainous relief offers visitors landscapes of a remarkable natural radiance, combining the beauty of the mountains with that of the sea. From high peaks to bays with crystal-clear waters, the island has 18 ecosystems. The northern half of the island is classified Natura 2000 in order to preserve its fragile flora and fauna. Nearly 90 endemic, rare or endangered species have been listed, including the Holzman’s silene, which is protected by the Treaty of Berne and Greek law. The eastern slopes of the island are mainly covered with pinus Brutia, but other Mediterranean tree species, such as the mastic tree or the carob tree, complete the landscape. At high altitudes, shrubs and plants such as Phoenician juniper, tree spurge and an endemic variety of Germander thrive. Along the rocky coasts, in a windy and salty environment, rare species such as Limonium carpathum and Zygophyllum album grow.

In danger of extinction, a few dozen Mediterranean monk seals live along the coasts. The most endangered marine mammal in Europe, it finds refuge here for its reproduction. Crustaceans, molluscs and shellfish, such as the Noble pen shell, which can measure more than one metre in length., also populate its waters. The terrestrial fauna consists of various small mammals, as well as amphibians and reptiles. 43 species of birds have also been recorded, 11 of which breed locally. Among the birds of prey are Bonelli’s eagles, Long-legged buzzards, Eleonora’s and Peregrine falcons. By the sea, it is possible to observe European shags and gulls. You will also be amazed by the beauty of the Blue rock thrushs or the Blue-cheeked bee-eaters and European bee-eaters.

The island of Karpathos / Κάρπαθος is not very large, but it is a concentrate of the nature, culture and history offered by the Greek islands of the Dodecanese archipelago. Numerous hiking trails allow you to explore every nook and cranny of this small piece of land in the Aegean Sea. With moderate tourism, it has managed to maintain a true authenticity that satisfies all travellers who cross it.

The crossing of the island of Karpathos is a hike that takes paths that are mostly accessible to all, with some wilder off-trail passages. The route reaches the beaches, villages and peaks of the island. It can be done independently, sleeping under the stars or in a hotel, and does not present any major difficulty. It is possible to easily adapt the stages according to one’s level and desires.

The crossing does not present any difficult passages, the most delicate being limited to the descent of a small scree slope, or to putting your hands through a boulder. It is within the reach of all hikers, including beginners. The main difficulty lies in the orientation. Marking is present on some stages, but absent on others. Sometimes the route takes off-trail passages where you have to find your way. It requires a little skill in orientation or in using the GPS track provided.

As the stages are free, it is easy to adapt the length of the days according to your wishes and your level. Generally speaking, this trek does not require a particular physical condition. As the route regularly passes through villages, it is possible to eat in taverns and rest in hotels or spend nights under the stars.

The trek remains secluded as a whole, but as the island is small, civilization is never far away in case of need. Only in the northern part around the villages and at the top of Kali Limni are the trails a bit frequented by hikers. A certain amount of self-sufficiency in food is necessary, as the grocery shops in the villages are limited. However, there are tavernas in each village to stop for a bite to eat. Water is available throughout the island.

The gradients are not excessive, even if the route descends several times to sea level. The climbs can sometimes be a little steep, but the gradients are generally well-balanced throughout the day. The altitude does not exceed 1215 metres at the top of Kali Limni.

There are more than twenty-five marked hiking trails on the island of Karpathos / Κάρπαθος. They are numbered ΟΛ1, ΟΛ2… for the Olympos / Όλυμπος region and ΚΑ1, ΚΑ2… for the Pigadia / Πηγάδια region (also called Karpathos / Κάρπαθος). This network is completed by many other paths and trails. No matter how long you wish to spend on your hike, you will find what you are looking for. The island can be explored by taking short stages to discover the villages and enjoy the beaches. If you don’t make a particular stopover, it takes no more than seven days to complete the entire crossing.

There is no marked long-distance footpath that crosses the entire island. This crossing is made by using paths, marked or unmarked trails and a few off-trail passages. In this guide, the stages are not described from day to day, but from one village to another, each one being free to create its own itinerary. You can cut out your daily stages according to your rhythm and, above all, according to your wishes. Overnight pitches are recommended all along the crossing.

2 to 3 days hike: North point of the island. Travel from the wild and isolated northern tip of the island, from Olympos / Όλυμπος, one of the most beautiful villages on the island, to the seaside village of Diafani / Διαφάνι. To extend the walk, you can reach the charming beach of Papa Minas / Παπά Μηνα or take the boat to the islet of Saria / Σαρία.

3 to 4 days hike: Villages and peaks. Discover the South and its beautiful mountain villages, with a departure from Menetes / Μενετες to the dazzling beach of the fishing village of Kato Lefkos / Κάτω Λευκός. The route passes through the ridges and leads to the summit of Kali Limni / Καλή Λίμνη, the highest point on the island. For a longer walk, continue in the direction of Mesochori / Μεσοχώρι.

4 to 5 days hike: Great Northern trip. Take a big loop in the north of the island with a departure from the fishing village of Kato Lefkos / Κάτω Λευκός. A half-wild, half-marked itinerary leading to the small port of Diafani / Διαφάνι. To extend the walk, you can reach the beach of Papa Minas / Παπά Μηνα or take the boat to the islet of Saria / Σαρία.

5 to 6 days hike: Great center trip. Explore the centre of the island, from Arkasa / Αρκάσα to Olympos / Όλυμπος, to discover its beaches, peaks and mountain villages. A beautiful crossing of the island in a shorter version, which can also be done with a departure from Pigadia / Πηγάδια.

7 to 9 days hike: Great way of Karpathos Island. The entire island can be crossed from the airport or from the capital Pigadia / Πηγάδια. The route leads to the village of Diafani / Διαφάνι, and from there the crossing can be completed by a return trip to the beach of Papa Minas / Παπά Μηνα or by taking the boat to the islet of Saria / Σαρία. You can return to Pigadia / Πηγάδια with a short cruise and continue walking to the airport via Menetes / Μενετες.