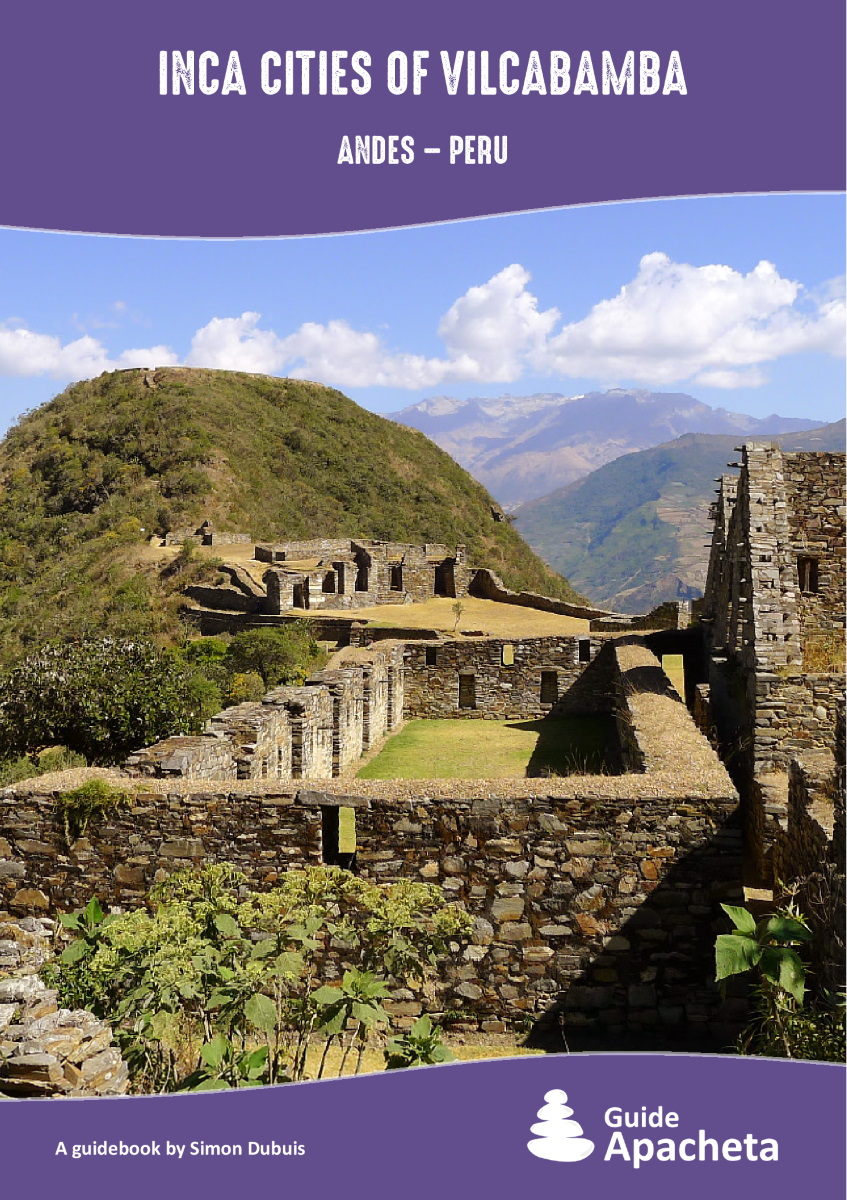 The Vilcabamba mountain range is located in Peru, in the Cusco region, near the cities of Abancay and Cusco. During the Spanish invasion, it was the last refuge of the Incas, a natural bastion to lead the rebellion for more than 35 years. Today, it is full of Inca ruins immersed in an exceptional setting. Discover the mysterious cities of Choquequirao, Vitcos or the most famous of them all, the city of Machu Picchu.

You will find in this 43 pages guide, all the necessary information to organize your hike, a complete description of the routes, as well as a GPS track associated with the topo. A complete GPS file of 270 km of trails which includes 19 tracks and 97 waypoints.

The Vilcabamba Mountains is located in the Peruvian Andes, near Cusco and not far from the Amazon. It is more than 100 kilometres long with an abrupt and jagged geography. Its deep valleys descend to an altitude of 1500 metres, while its peaks exceed 5000. Nevado Salcantay is the highest point at 6271 metres and its only 6000. This mountain range offers a range of extraordinary environments. It shelters arid canyons, high pampas, high rocky passes, snow-covered peaks, not forgetting the jungle.

The name Vilcabamba is of Quechua origin, the language of the Incas, and means “Sacred Valley”. The two great rivers, the Río Apurímac and the Río Urubamba, which encircle and isolate the cordillera, were sacred to the Incas. They had managed to conquer these rugged, difficult to access mountains and to build many cities. The best known of these is of course the legendary Machu Picchu, which has been a UNESCO World Heritage Site since 1983. Then comes the city of Choquequirao, often referred to as its little sister. A site which is to date accessible only on foot (a cable car project is in progress). But the cordillera contains other marvellous cities, such as Vitcos or Espíritu Pampa. The most recent discovery is that of Corihuayrachina, perched on the top of a ridge near the village of Yanama. To this day, it is still inaccessible and completely covered by vegetation.

Most of these cities were built during the reign of Pachacuti Yupanqui known as Pachacútec. He was one of the greatest rulers of the Inca civilization. Together with his son Túpac Yupanqui, they transformed the kingdom into an empire, the Tahuantinsuyu Empire. These cities played an administrative role, controlling the exchange of merchandise between the Andes and the Amazon and serving as a religious centre. During the 36 years of rebellion after the arrival of the conquistadores in Cusco, the Incas found refuge in the foothills of the Vilcabamba Mountains. There they fought their last battles from the cities of Vitcos, Espíritu Pampa… in the hope of regaining their sovereignty over the Tahuantinsuyu Empire. But in 1572, Túpac Amaru, the last inheritor of the Inca Empire, was captured and executed. This event marked the definitive end of this civilisation, although two descendants tried to regain power in 1740 and 1780.

The environment of the Cordillera Vilcabamba is very varied according to altitude. It includes the humid forests of the Amazon, the high desert pampas, deep valleys and dry woods. The flora that derives from its different ecosystems is incredibly diverse. Among the most representative are the cantuta, the sacred flower of the Incas and national flower of Peru, the cotton tree and the queñua, the tallest tree in the world. Closer to the jungle, fruit trees are very present. The wealth of animals is just as surprising. The cordillera is home to many species of birds, such as the hummingbird, the mountain caracara and of course the Andean condor. You can also meet exotic birds from the Amazon, such as the parrot, the squirrel cuckoo recognizable by its long tail. Numerous mammals also find refuge here, such as the huemul, a small deer, the coati, a type of raccoon or even the puma and the spectacled bear.

Today, its proximity to Cusco and its natural and historical wealth make it a privileged trekking destination in Peru. Although some paths are regulated, others are frequented, it retains a potential of great trails for trekking.

The Vilcabamba Mountains is a popular trekking destination. Some routes, such as the Salcantay route, are very popular, while others are much less so. All the routes covered in this guide are accessible to all hikers. Nevertheless, given the altitude and the differences in altitude, it is recommended that you are in good physical shape.

There are no technical or difficult passages on this trek. However, given the steep geography of these mountains ranges, landslides can always occur and make the passages tricky. As far as orientation is concerned, apart from a few exceptions, the paths are quite obvious and easy to follow. The route between Huancacalle and Yanatile is more difficult to find, as this area is wilder…

Some of the routes are strenuous. This is particularly the case for those leading to Choquequirao. The gradients are steep, the slopes are steep and it is very hot. However, the numerous campsites along the route make it possible to divide up the stages. The passages of the high passes at more than 4500 metres will also be a challenge for some, depending on your degree of acclimatisation to the altitude.

The routes from San Pedro de Cachora and Mollepata to Playa Sahuayaco are busy and the valleys are inhabited. So you will not be alone and you will be able to refuel along the way. That said, they still remain far from any town without a quick exit from the cordillera in case of problems. The routes that lead to Huancacalle and Yanatile are much more isolated. You will be on your own and there is little chance that you will come across other hikers.

The daily height differences are significant, often between 1000 and 1500 positive metres and sometimes up to more than 1500 negative metres. This is enormous for inexperienced hikers, especially with a large backpack. For the altitude, as the departures are under 3000 metres, with routes that gradually climb, acclimatisation generally goes well to pass the passes at over 4000 metres.

The Vilcabamba Mountains has many trekking trails, the most famous of which are those leading to the town of Choquequirao, at the foot of Nevado Salcantay, as well as the famous Inca Trail, the only trail to lead to the site of Machu Picchu (closed to individuals, agency required). But it also includes a multitude of other trails that offer great trekking possibilities. These mountains ranges have itineraries of different levels, ranging from discovery treks of a few days to committed treks of more than ten days of walking.

3 to 5 days hike: Salcantay Trek, Choquequirao Trek, Vitcos Trek. The most popular trek, only because it is the shortest way to reach Aguas Calientes without taking the train, one that starts from Mollepata and passes at the foot of Nevado Salcantay to reach Playa Sahuayaco. It can be extended through Llaqtapata. The second popular hike is the one that goes back and forth to the town of Choquequirao from San Pedro de Cachora. This trek is very difficult because of the steep gradients, but it offers the exceptional advantage of discovering an Inca city that is only accessible on foot. Off the beaten track, because it is more difficult to access, there is the route that leads from Huancacalle to Yanatile. It is of a moderate level and offers a very varied panorama and allows you to discover the archaeological site of Vitcos and, like the one in Salcantay, to arrive at Santa Teresa.

5 to 10 days hike: Crossing of Vilcabmaba. For treks lasting more than 5 days, you have to start from San Pedro de Cachora and reach Yanama via the Choquequirao site. From there you have two options. Either continue westwards towards Aguas Calientes, it is also possible to stop at Playa Sahuayaco. Or you can go north to Huancacalle along a beautiful Inca Trail that leads to the site of Vitcos and from there take a transport to Santa Teresa and then to Aguas Calientes.

More than 10 days hike: Great crossing of Vilcabamba. The longest route is from San Pedro de Cachora to Huancacalle as described above, and then towards Yanatile along an ancient Inca Trail. For the craziest, you can imagine a trek from San Pedro de Cachora to Huancacalle, then Yanatile and visit Machu Picchu. Then you can return to Hidroeléctrica to continue with the trek from Salcantay to Mollepata. It will take you more than 15 days to complete this tour.