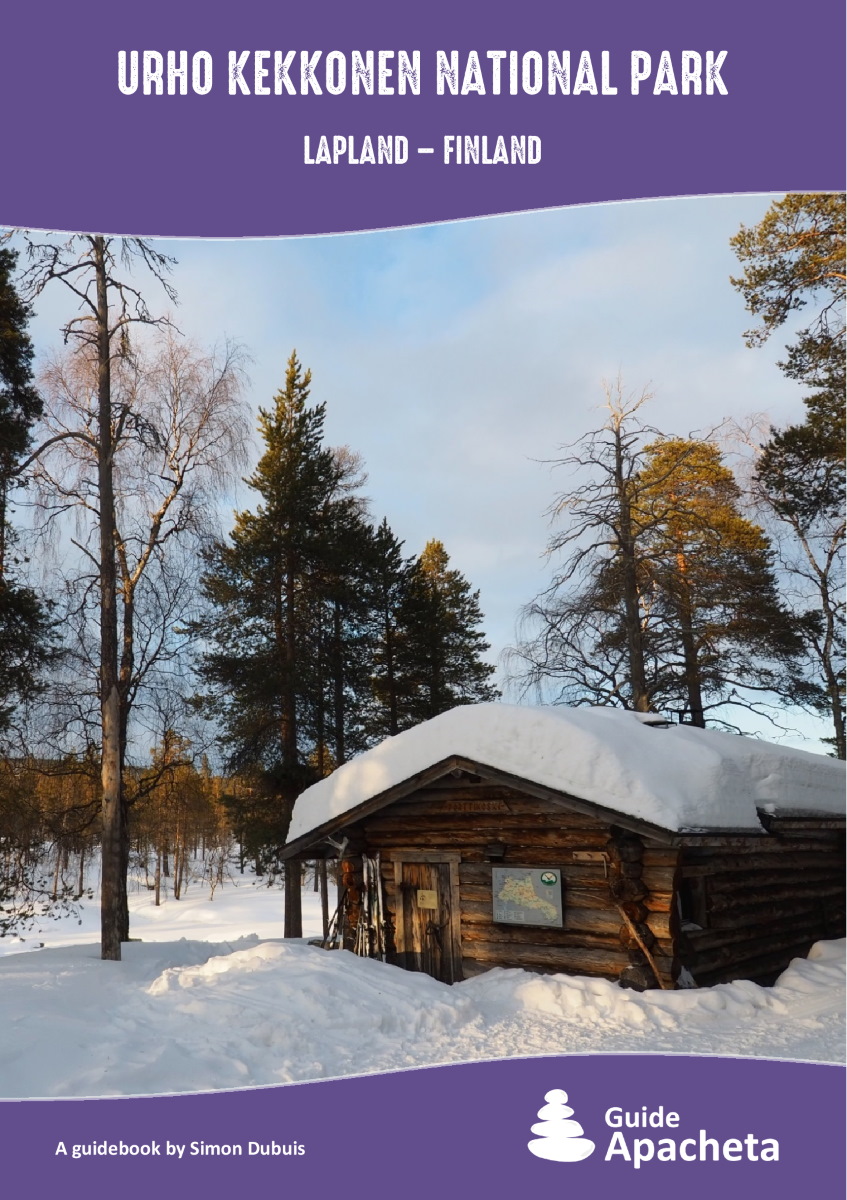 Winter trekking on skis or snowshoes under the northern lights

On skis or snowshoes through Lapland

The Urho Kekkonen National Park is Finland’s second largest national park and is located beyond the Arctic Circle in Lapland. A name that makes us dream, that leaves room in our imagination for vast expanses, snowy forests, reindeer and the northern lights. Since its establishment in 1983, it has become one of Finland’s most popular wilderness areas. In winter, its many trails and free-access huts provide a great escape into the depths of the taiga and tundra on backcountry skis or snowshoes.

You will find in this 50 pages guide, all the necessary information to organize your hike, a complete description of the routes, as well as a GPS track associated with the topo. A complete GPS file of 150 km of trails which includes 11 tracks and 50 waypoints.

The second largest national park in the country, the Urho Kekkonen National Park, or Urho Kekkosen Kansallispuisto in Finnish, was established in 1983. It is named after the eighth President of the Republic of Finland, an avid hiker and backcountry skier, who served four successive terms from 1956 to 1981. It covers an area of 2500 square kilometres and is located beyond the Arctic Circle in Lapland.

This term can refer to several geographical locations. Both Sweden and Finland have an administrative region called Lapland. Culturally, Lapland is a cross-border region in Northern Europe, straddling Norway, Sweden, Finland and Russia. It encompasses the vast territory historically inhabited by the Sámi people. Long known as Lapps, a pejorative Swedish word meaning rag wearers (old, worn and dirty cloth worn as clothing by the needy), the region eventually took on the name Lapland.

In Sami, the language of the Sámi, their land is called Sápmi. Nomadic people, gatherers, fishermen and wild reindeer hunters, they gathered in villages during the winter. In the area of the present park there used to be four Sami villages, one of which gave its name to the Sompion Game Reserve. Sámi culture began to decline in the 16th century with the arrival of settlers and their evangelisation by missionaries. The shamanic religion and the Sámi language were forgotten with the passing of time. The wild reindeer also disappeared under the guns of the settlers. In the 16th century, Sámi from Norway returned to the area and brought reindeer with them. Reindeer husbandry thus developed in the area. Until the beginning of the 20th century, reindeer herders still lived in the area of the future park.

The Urho Kekkonen National Park has many varied landscapes, consisting of vast swamps, a multitude of gorges and mounts, huge taigas (boreal forests) and tundras (polar moors). The northern part is characterised by the river valleys of Luttojoki, Suomujoki and Muorravaarakkajoki. The south consists of wild pine and spruce forests and isolated hills. In the southwest, in the Sompion Strict Nature Reserve, there are large aapa bogs (open bogs), which are nesting grounds for many birds. To the east, near the Russian border, the mountain ranges are imposing, especially with the Sokosti, the highest point of the park with its 718 metres of altitude.

About twenty wild mammals live in the park. Large carnivores, such as brown bears, wolverines, wolves and lynxes, stay in the most remote parts. Others are more easily observable such as reindeer, hare, elk, otter or fox. There are also smaller wild mammals, including shrews, voles, martens, weasels… The bird population is also large and diverse. One hundred and thirty species have been recorded, some of which are in danger of extinction, such as the gyropteran falcon and the peregrine falcon. Official emblem of the Urho Kekkonen National Park, the golden eagle is also present. Twenty couples nest in the park. The majority of the birds are migratory, with the first returning in February or early March. The most numerous birds are passerines, with the Brambling, Willow warbler, Meadow pipit, Redwing and Common Redpoll, Grey-headed chickadee, but also the Siberian jay, Three-toed Woodpecker and Lagopus (Ptarmigans).

During the winter, the climate can be harsh. The temperature generally varies between -5 and -30°C and can sometimes drop as low as -50°C. The wind can also be present, sometimes violent, thus lowering the temperature felt. The days are short and in December the polar night does not let the sun rise. The dark nights are illuminated by the starry sky and the northern lights. This fairy-tale spectacle offers a sublime reward to those who set out to discover Lapland in winter.

Lapland, a name that makes us dream, that leaves room in our imagination for vast expanses, snowy forests, reindeer and the northern lights. Since its establishment, the Urho Kekkonen National Park has become one of Finland’s most popular wilderness areas for hiking and backcountry skiing. In both summer and winter, the park with its many trails, campsites and huts offers an escape into the depths of the taiga and tundra. An immersion in a raw and unspoiled nature, which offers its visitors an unforgettable wonder.

In winter, the Urho Kekkonen National Park can be explored on backcountry skis or snowshoes. It offers itinerary possibilities ranging from a few days to 10 days of immersion in wild Lapland. Although the gentle, hilly terrain presents no difficulties and is accessible to all, an independent winter raid requires good physical condition.

The overall relief is gentle and hilly, with no difficult passages or steep slopes. This raid remains accessible even to beginners in backcountry skiing. The main difficulty lies in the orientation. The snow-covered paths are not visible and there are no signposts. The only tracks that can be seen are those left by previous people, as long as there is no new snowfall. Orientation skills and/or the use of a GPS with the track provided are essential.

The duration of the stages can vary greatly depending on the weather and the quality of the snow. With the intense cold, it is sometimes difficult to take breaks during the day. It is advisable to be in good physical condition. There is generally no possible withdrawal between two huts, unless you have planned a camp equipment. Luckily, the huts are comfortable and well equipped, allowing you to rest in the warmth.

The park is very isolated, there are no guarded huts or roads, and in winter there are not even any paths. Apart from other ski and snowshoe hikers, only a few park rangers occasionally go through the park on snowmobiles. Once in the park, there are no refreshments available. This trek requires total autonomy. The huts are all equipped with a woodburning stove and a gas cooker.

Even if on skis the slightest climb seems to be an obstacle, the difference in height remains slight on the whole route. On average, the positive difference in altitude is between 100 and 200 meters, and on the last stage, it is 400 meters. The altitude also remains relatively low between 150 and 490 meters. By climbing a summit, it is possible to reach an altitude of 718 metres at the top of the Sokosti.

This guide describes the itinerary of each stage, but not as precisely as the other works. In winter, it is impossible to detail the route precisely, as the orientation is more complex with snow. An outdoor GPS, or a GPS application on the phone, is highly recommended.

In winter, many routes can be followed to reach the various huts on backcountry skis or snowshoes. The skis remain more suited to the terrain and the snow of Lapland, especially for long itineraries. Although they mainly follow the summer trails, these are invisible, covered by snow. Once you leave the cross-country ski trails in the Saariselkä and Kiilopää area, there are no winter markers within the park grounds. Only the tracks of previous skiers, and sometimes those of the park warden’s snowmobiles, indicate the path to follow. The relief is gentle and the forests are sparse, so it is easy to go anywhere and everywhere. Above all, following the routes allows you to take the shortest path between two huts.

The huts located near the ski area are day huts. It is necessary to go down about fifteen kilometres to reach the first huts at night. Thus, it is possible to go on a backcountry ski raid or a snowshoe trek lasting a few days, to a loop of about ten days. In order to start with a shorter first stage and with less difference in height, it is preferable to complete this loop in an anti-clockwise direction, as described in this guide.

5 days hike: Round trip to Luirojärvi. From Kiilopää you can reach Lake Luirojärvi in 2.5 days and then enjoy the area and the sauna. The return journey takes just two days. This route passes through different environments that allow you to get a good view of the park in just a few days: taiga, Peeled Mountain, frozen lake, river…

6 to 8 days hike: Small tour. The route starts by reaching Lake Luirojärvi and then makes a beautiful loop in the heart of the park. It takes a week to discover the region’s natural gems and to reach more remote corners. The first part is easily accessible, while the second part between Luirojärvi and Porttikoski is more sporty.

8 to 10 days hike: Big tour. The big tour allows you to discover the confines of the park, beyond the mountainous area, by crossing beautiful passes to go around the different mountain ranges. A total immersion in a wild and raw Lapland that requires a certain commitment and to be in autonomy for about ten days.

To these three routes, it is possible to add the ascent of the Sokosti from Luirojärvi. The highest peak in the Urho Kekkonen National Park is 718 metres above sea level.

For a departure from Saariselkä, simply take the cross-country ski trails to Kiilopää. On the way back, there are also trails to the village from Luulampi.