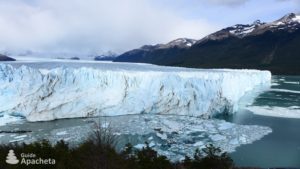 Los Glaciares National Park is located in the southwestern part of Argentine Patagonia, on the Chilean border. It encompasses two large lakes of glacial origin, the Argentino and the Viedma, as well as some mythical mountains, such as the Fitz Roy, which rises to 3405 metres. It has, above all, 47 large glaciers and 200 smaller ones. Created in 1937 and declared a UNESCO World Heritage Site, its name comes from the many glaciers that flow into its lakes, Perito Moreno, Upsala, Spegazzini, Onelli, Agassiz, Bolado and Viedma, which are part of the Campo Hielo Continental.

Glacier Perito Moreno : It was named after the explorer Francisco Moreno (perito meaning expert), who studied this region in the 19th century and played a major role in the defence of Argentine territory. It is one of the only three glaciers in Patagonia that is not regressing, advancing about two metres per day. Its front is about 5 kilometres long and 170 metres high, of which 60 metres are emerged, for a total area of 250 square kilometres. 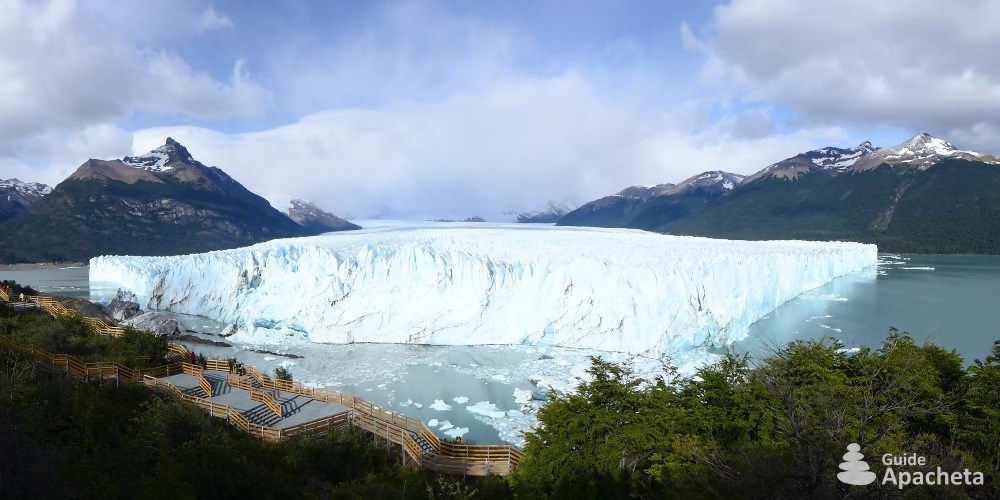 At 80 kilometres from El Calafate, this footbridge allows you to get close to the Perito Moreno. Located in front of the gigantic ice tongue, it offers exceptional panoramic views from all angles from its different levels. It allows you to contemplate (unlike a boat trip) the top of the glacier, as well as the famous ice bridge. This excursion is ideal for taking the time to admire the giant and to pose for pictures. The “Safari Náutico” option allows you to board a boat from the small port Puerto Bajo de las Sambras for a one hour trip under the South face of the glacier. 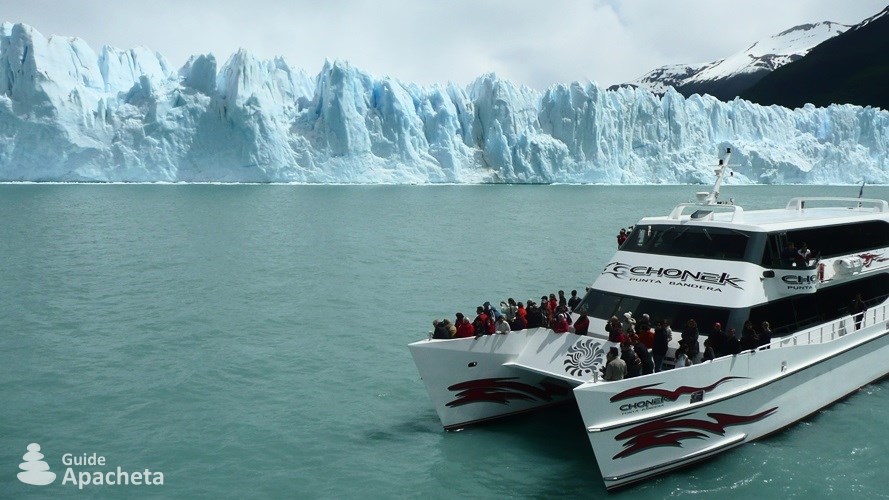 The Ice Rivers excursion (formerly “Todo Glaciares”, all glaciers) is an exceptional glacier cruise on Lake Argentino. It starts at the Puerto Bandera port, located 45 kilometres from El Calafate, for an extraordinary day’s sailing among icebergs and glaciers. The catamaran begins by heading towards the North Arm through the Boca del Diablo Passage, to approach the Upsala Glacier, the second largest in South America, after Pius XI (Chile) and the Spegazzin Glacier, the highest in the park with an emerged front of 135 metres, passing through the great barrier of icebergs and Onelli Bay. Then it goes to the South Arm through the Timpanos Channel to admire the most famous and impressive of Patagonia’s glaciers, the Perito Moreno.

Both excursions start under the footbridge at the port Puerto Bajo de las Sambras. It begins with a 20-minute sail to reach a small refuge located in the forest bordering the Perito Moreno. They allow you to tread the ice, crampons on your feet in the middle of crevasses, caves, blue lakes… to hear the cracking of the ice and to realize how alive the Perito Moreno is. Mini-trekking is a walk of about two hours and is aimed at people who have no experience in ice hiking and who wish to get up close to the glacier. As for the Big Ice, it is more physical and demanding, the hike lasts about four hours. Usually these tours also allow you to spend an hour at the footbridge.

For each excursion you have to add the entrance ticket to Los Glaciares National Park of 260 Pesos.