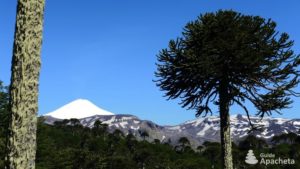 The Chilean pine (Araucaria araucana) is a tree native to Northern Patagonia, present along the Chilean and Argentinean Andes Cordillera. In these lands at the end of the world, this strange conifer is better known under the name of pehuen. The word pehuen comes from mapudungun, the language of the Mapuche, one of the most demographically important Amerindian peoples of Patagonia. Pehuen has played an important role in the history, development and beliefs of the Patagonian peoples. For example, the Pehuenches take their name from the tree from which they made the piñon (gable), its fruit, one of the bases of their diet.

One of the peculiarities of this species is that there are male and female trees. The cones (a kind of big bread apple) of the males are grouped in clusters, while those of the larger females are isolated on the branches. These can contain 100 to 200 pine nuts (seeds). 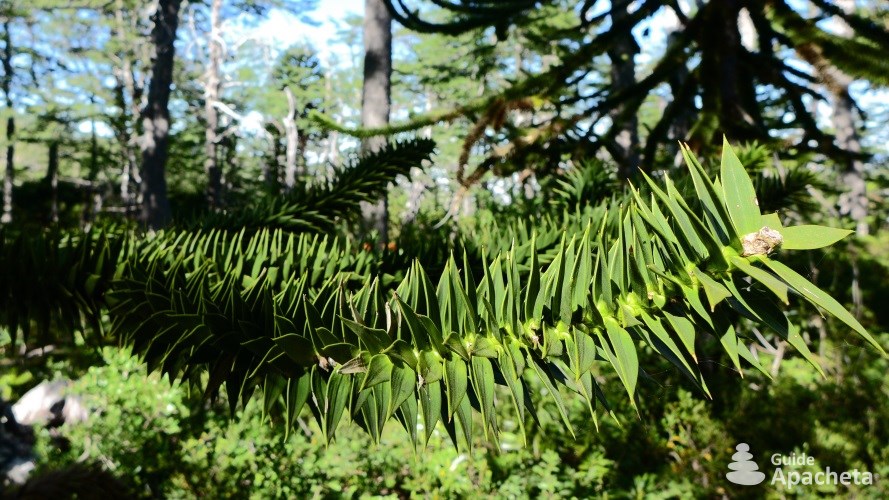 The araucaria can grow up to 40 metres high and its trunk measures between 1 and 1.5 metres in diameter. When it is young, the trunk is covered with leaves which, when it loses them, leave very particular marks on the trunk, forming checks along the trunk. Its evergreen leaves, which extend over the whole of its branches, are like scales that give it natural protection.

The Pehuen is a thousand-year-old species, dating back to the Jurassic period, and has therefore rubbed shoulders with the dinosaurs! Today it is endangered and is mainly present in the national parks of Chile and Argentina, such as those of Villarrica, Lanín, Nahuel Huapi (download the guide of this park), Puyehue…