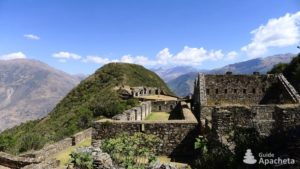 Perched on a ridge, the city of Choquequirao is divided into three major areas. The main site, straddling the mountain, is made up of several sectors. It has a main square, called Haucaypata, surrounded by numerous buildings, houses, barracks, temples… and overlooking several terraces. A little further up are the Qolqas, two-storey food warehouses. Then above, the small Hanan square reserved for the nobility. It is in this area that water arrived in the city, via a small canal. On the other side of the Ushnu (the truncated circular mountain) is the priests’ quarter and their houses. Then on the eastern flank of the Ushnu, below are the administrative buildings, called Pikiwasi. The other two important areas of the site are composed of terraces, located on either side of the site, a very large semicircular one and a smaller, but vertiginous one, which contains the famous stone lama designs. 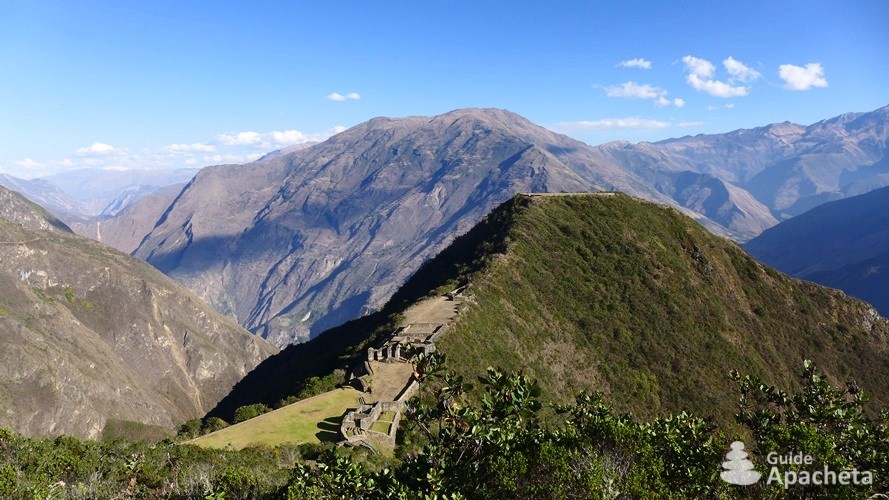 The city of Choquequirao was built in the 15th century under the reign of Pachacútec, the great Inca emperor who developed and modernised the Tahuantinsuyu Empire. Inked on top of a narrow valley, the city would have served as a control and surveillance centre between the Andes and Amazon regions, but also, like all Inca cities, as a regional religious centre. Subsequently, the Vilcabamba Mountain Range became the bastion of the Inca resistance for almost 36 years when the conquistadors took power in Cusco. The region was the scene of fierce fighting and the city of Choquequirao served as a base until the time of the Inca Emperor Manco, who was forced to retreat further into the mountain range, towards Vitcos and Espíritu Pampa.

During the 1800s, two explorers reached the city, but it was not until 1909 that it was really rediscovered by Hiram Bingham. The scientific expedition then carried out a detailed description of the Choquequirao and a topography of the place. From 1970 onwards, several archaeological campaigns brought most of the Choquequirao site to light, which in Quechua means “Golden Cradle”.