The archaeological site of Vitcos, also known as Rosaspata, houses many buildings, such as royal residences, temples, a fortress, houses, agricultural terraces… It is divided into several sectors spread over a hill. The large central square of Vitcos is surrounded by many royal buildings. The impressive two-storey palace houses finely carved temples and the Inca’s residence with 8 large rooms. The site of the ceremonial gardens is characteristic with its terraces typical of the Inca period. The ceremonial area of Ñusta Ispana includes a monumental carved rock known as Yuraq Rumi, a sacred altar that served as a high place of worship. 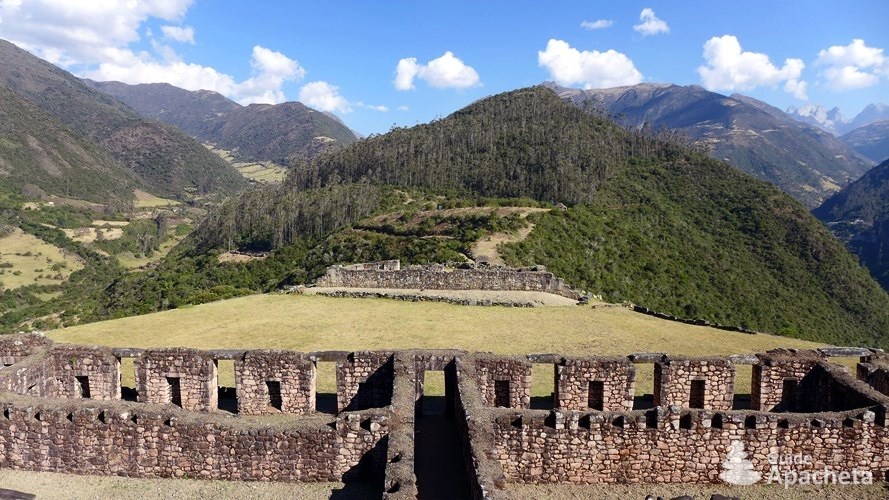 The city of Vitcos was built in the 15th century during the reign of Pachacútec, the great Inca emperor who developed and modernised the Tahuantinsuyu Empire. This palace would have been, for many years, the provincial capital of Vilcabamba. Located halfway between the mountains and the jungle, this citadel served as a centre of exchange and control between the Andean and Amazonian regions. The Incas then moved this capital to nearby Espíritu Pampa. Subsequently, the Vilcabamba Mountain Range became the bastion of the Inca resistance for almost 36 years when the conquistadors took power in Cusco. The region was the scene of fierce fighting and the city of Vitcos was finally destroyed around 1572, when the last Inca emperor, Túpac Amaru, leader of the resistance, was arrested and executed.

When in 1911 Hiram Bingham searched for the city of Vilcabamba, he rediscovered an archaeological site then called Rosapata by the villagers. With the help of the accounts of the conquistadors who led him to the ruins, he realised that it was in fact the Vitcos Palace. In 1980, the archaeologist Vincent Lee carried out excavations and uncovered numerous buildings on the hill.