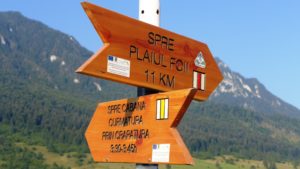 At one time, all the Romanian mountain ranges were signposted, hiking was a tradition. Since then, many stretches have been abandoned, with time the vegetation has regained the upper hand and the marks have faded away. Today, only certain mountain ranges benefit from a maintenance programme. The markings come in 3 colours (red, blue or yellow) and 4 different geometric shapes (strip, cross, triangle or round) on a white background. Each symbol has a particular meaning.

The mountain ranges most suitable for hiking are perfectly covered, such as Munţii Maramureş, Rodnei, Ceahlău, Bucegi, Piatra Craiului, Retezat… or Făgăraş. Find the topo of this mountain range with the Guide Apacheta – Făgăraş Mountains.

The colours are used without any particular distinction, they are just there for the variety of markings. That way, no two paths with the same markings cross each other. As a rule, only the red vertical strip is used for the main ridge path in the mountain range.

The red square is not a hiking marker. It indicates the boundaries of national and natural parks.