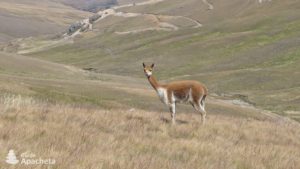 Peru benefits from an exceptional fauna which is due to its very diversified environment between the coast, the sierra (Andes Cordillera) and the selva (Amazonian jungle). In the Andean region, the fauna varies according to the different ecosystems:

Below are the most frequent and representative species of the Peruvian Andes.

South Andean deer (Hippocamelus bisulcus) – see picture
Nom local : Huemul ou taruca
This uncommon deer lives alone or in family groups of a few individuals. Its habitat extends in steep areas, from the tops of forests to the foot of snowy peaks, depending on the season but always close to a water source.
Its diet is exclusively made up of a variety of plant products depending on the region where they live: herbaceous plants and shrubs, flowers, mushrooms, fruit, berries, lichens…
With a uniform brown coat, the size of the male can reach 1 metre at the withers for a weight of 70 to 90 kg. It is differentiated from the female by its 30 cm long horns.

Pampas cat (Leopardus colocolo) – see picture
Nom local : Gato parejo
Native to South America, the pampas cat has many subspecies. The Peruvian one lives mainly on the high plateaus up to 5000 m of altitude.
Small in size, this animal measures between 50 and 70 cm and weighs up to 4 kg on average. Its coat is of variable colour, in yellow or brown tones, and may be accompanied by stripes.
Mainly nocturnal, the diet of this carnivorous predator consists of all kinds of small vertebrates, such as guinea pigs, birds…
Its cousin, the Andean cat, with a grey striped coat, lives at altitudes above 4000 m, close to the viscaches.

Northern viscacha (Lagidium peruanum) – see picture
Nom local : Viscacha peruana
Its name, of Quechua origin, refers to species of rodents belonging to the chinchillidae family. With its long ears and grey-brown coat, it can be likened to a hare.
Quite common, this Peruvian species can be found in high altitudes from northern Peru to northern Chile. It lives in groups of 4 to 75 individuals, on the edge of rocky slopes and crevices, to be able to escape in case of danger. This animal moves with great agility and basks in the sun during the day. 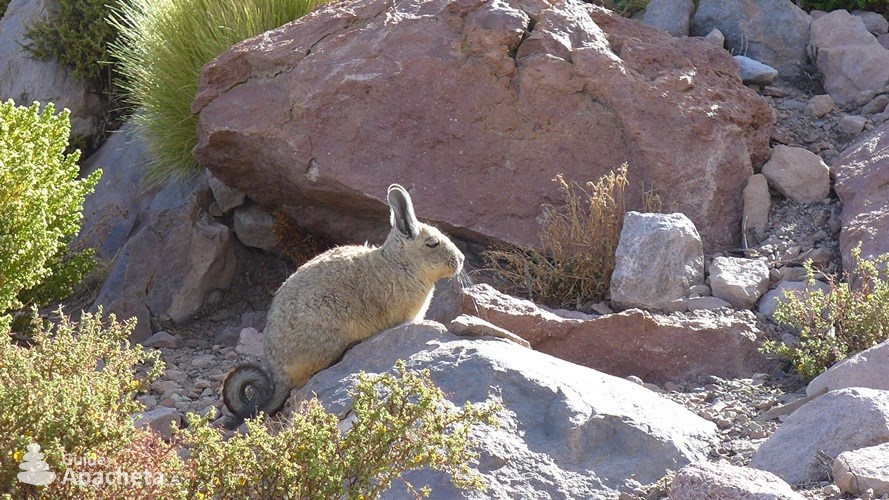 Cougar (Puma concolor) – see picture
Local name: Puma
It is the largest feline in the Peruvian Andean zone, the second largest after the jaguar for the whole of the American continent. Although it is not widespread, it can be seen from Canada to the south of Chile and Argentina, in mountainous areas, forests and open habitats, at altitudes ranging from 0 to 5000 m. Solitary in nature, it seeks individuals of its species mainly during the breeding season.
Thanks to its very good eyesight, this mammal can hunt during the day as well as at night. With its top speed of up to 60 km/h, the puma is an excellent predator. It feeds mainly on medium and large mammals, such as deer, but it can also feed on smaller prey, such as snakes, rats and viscaches.

Culpeo (Lycalopex culpaeus) – see picture
Local name: Zorro andino, colorado ou culpeo
Quite common, the Andean fox has similarities with the red fox in its reddish legs and head. Present from the equator to Tierra del Fuego, its habitat extends from the mountains and deep valleys of the Andes to the deserts and forests of the south.
Mainly nocturnal, this omnivorous scavenger feeds on a variety of prey (birds, insects, small mammals, reptiles…) and fruits. In this way, it contributes greatly to the maintenance of the ecosystem.
It leads a solitary life, except during the breeding period (from August to October), as well as during the education of fox cubs. Hunted by fur hunters and breeders, its population nevertheless remains stable.

Spectacled bear (Tremarctos ornatus) – see picture
Local name: Oso anteojos ou andino
Measuring between 1.50 and 1.80 m for 100 to 170 kg, the spectacled bear is the only bear and one of the largest land mammals on the South American continent. With its black fur, it is characterised by the outline of its white eyes.
Due to the human exploitation of agricultural land, its habitat is shrinking and its presence is now limited to the Andean mountain ranges from Venezuela to Argentina.
This arboreal and herbivorous animal spends most of its time in the trees of dense forests, where it eats and sleeps. Occasionally, it feeds on small to medium-sized mammals.
Without a precise population estimate, however, it is one of the most endangered species on the planet. 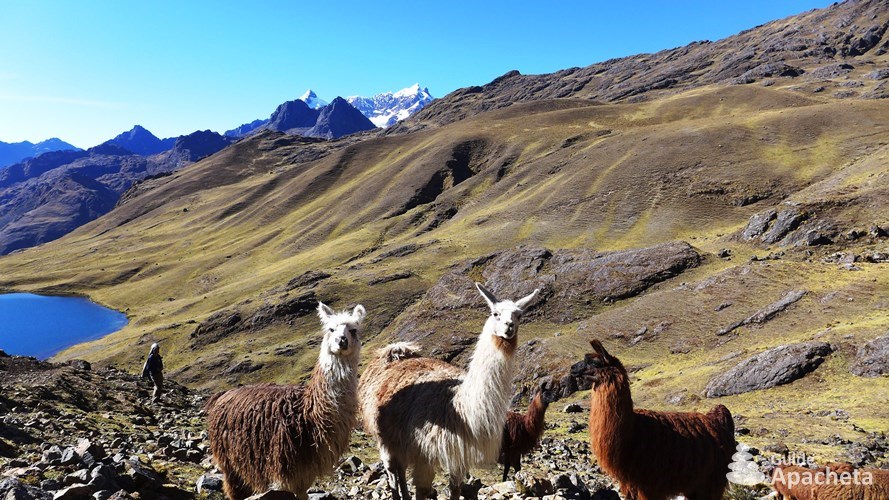 Llama (Lama glama) – see picture
Local name: Llama
With its height at the withers of 1 to 1.25 m, it is the largest of the small camelids. In pre-colonial times, the llama was already domesticated and exploited for its wool, meat and droppings (fuel). The most robust of the Andean camelids, it has long been used as a pack animal. It is reared at altitudes of between 2,500 and 4,500 metres and lives in herds according to a well-established social hierarchy, reflected in the form of a harem.
The llama is traditionally distinguished in two varieties, the Q’ara (peeled) and the Ch’aqu (woolly), appearing in a multitude of different shades. It offers a quality wool, less fine than that of alpaca, but more economical.

Alpaca (Vicugna pacos) – see picture
Local name: Alpaca
Called “paqu” in Quechua, the alpaca differs from the llama in that it is slightly smaller in size, has a shorter muzzle and ears and its fleece covers its entire head. Its breeding area is more restricted, from 3800 to 4800 metres above sea level, this camelid is mainly found on the shores of Lake Titicaca. Its social behaviour is almost identical to that of the llama.
According to the appearance of its wool, the alpaca is classified in two varieties: Huacayo or Suri.
Fine, soft and warm, alpaca wool is highly prized, and even more so when it comes to baby alpacas.

Vicuna (Vicugna vicugna) – see picture
Local name: Vicuña
Accustomed to high altitudes, between 3500 and 5000 metres, this camelid lives in the hostile, cold, windblown desert regions of the Andes Cordillera. To acclimatise to the lack of oxygen, its heart and lungs are proportionally larger than those of other camelids.
An undomesticated wild animal, the vicuna lives in a family group generally consisting of a male, a few females and their young.
The main daily activity of this herbivorous group is the search for food, reserving the night for rumination.
According to its reputation, the fineness and softness of its wool could rival silk. This has led to intensive poaching, placing it on the list of protected and endangered species.

Common vampire bat (Desmodus rotundus) – see picture
Local name: Vampiro común
The common vampire is one of the species of hematophagous bats. With its large incisors and fluid-forming saliva, it feeds mainly on the blood of farm animals and only exceptionally attacks humans. It can transmit the rabies virus.
This species lives in the tropical rainforests and grasslands of Central and South America, up to an altitude of about 3000 m. During the day, it takes refuge in caves or tree trunks, in colonies of up to a hundred individuals. 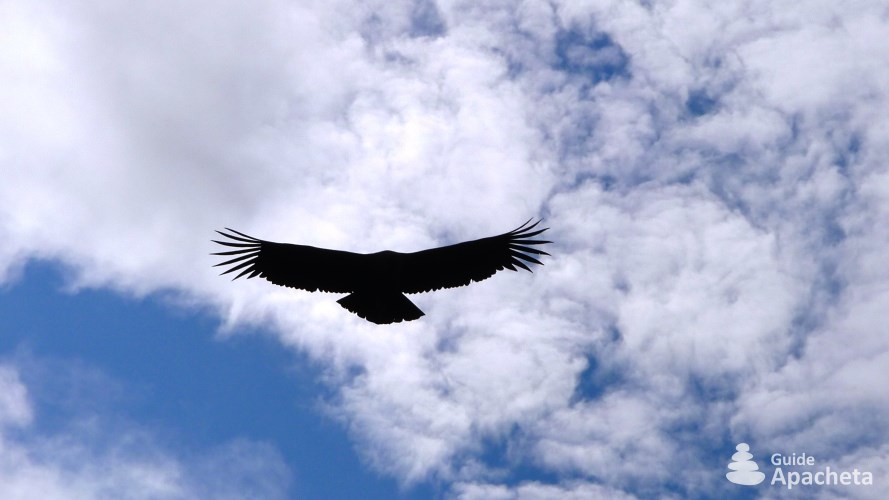 See the article dedicated to birds.

Discover the guidebook of Vilcabamba Mountains in Peru.